Gitennes owns 100% of the 2,150 hectare JMW Property which is located approximately 30 km south of Chapais Quebec. 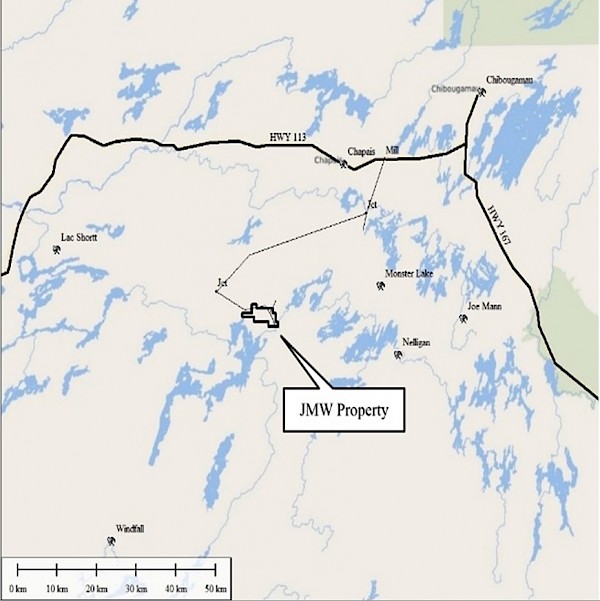 JMW is located along the Guercheville Deformation Zone which is host to the past producing mines and several gold prospects.  The JMW property has proven gold mineralization in drill holes associated with a major deformation zone.  The Chapais-Chibougamau area has seen an increase in exploration activity with the discovery of mineralization in a new geologic setting including the Monster Lake and Nelligan Projects.

Exploration by previous operators included airborne and ground geophysical surveys, geological mapping, prospecting and diamond drilling.  The majority of the past work was done in the 1980’s in the vicinity of the Guercheville Deformation Zone in a package of felsic to mafic volcanic rocks, intruded by porphyritic rocks all with varying degrees of sulphide and quartz mineralization.  Gold mineralization detected in the past has been associated with the mineralized porphyritic rocks and sericite schists (altered felsic volcanics).  Diamond drilling in the 1980’s included:

As well, many holes drilled to the north of the Guercheville Deformation Zone intersected anomalous gold mineralization.

Historically, exploration of the JMW Property has focussed on gold in quartz veins cutting altered and mineralized porphyritic instrusives.  While gold mineralization is hosted in “porphyritic” rocks and sericite schists (altered felsic volcanics) new targets exits in sedimentary rocks in the southern portion of the Property. 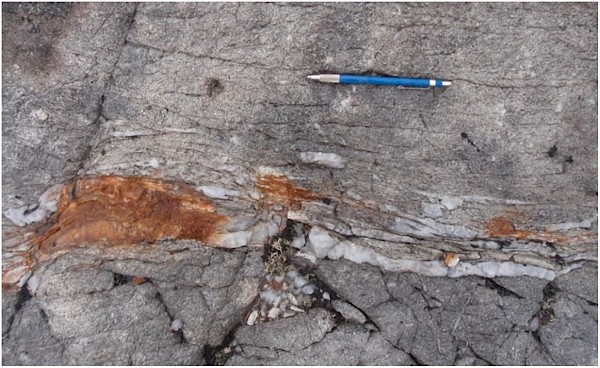 Porphyritic quartz-feldspar intrusive rocks, with strong sericite-carbonate alteration and mineralized with sulphide and reported gold grades varying from one to five grams/tonne over one metre widths in outcrops.

Most of the historical drilling focused on the intrusive rocks as the target was evidenced by a strong geophysical magnetic high from both airborne and ground magnetometer surveys. 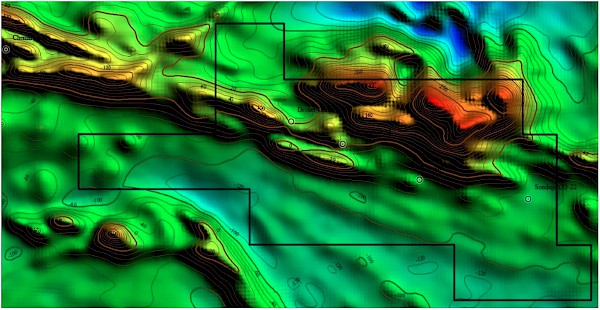 But most of the historical drilling was shallow and may indicate peripheral margin of higher grades, possibly at depth. 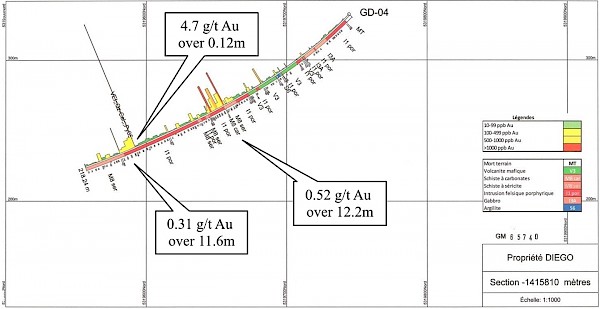 Gitennes has completed an extensive review of previous work on JMW including geology, geophysical surveys and drilling.  Based on the review three models are being used to plan this and future exploration programmes on JMW.

Target 1: Drilling in the 1980’s was relatively shallow and gold intersections have demonstrated good widths 9-12 metres with grades from 0.5 to 0.8 g/t gold.  This could indicate that drilling intersected the peripheral margin of more significant grades, possibly at depth;

Target 3: Exploration on strike with the JMW property by other companies has indicated that gold may also be associated with sedimentary rocks to the south of the Guercheville Deformation Zone.  The JMW property has a thick sequence of these rocks that have seen little exploration in the past. 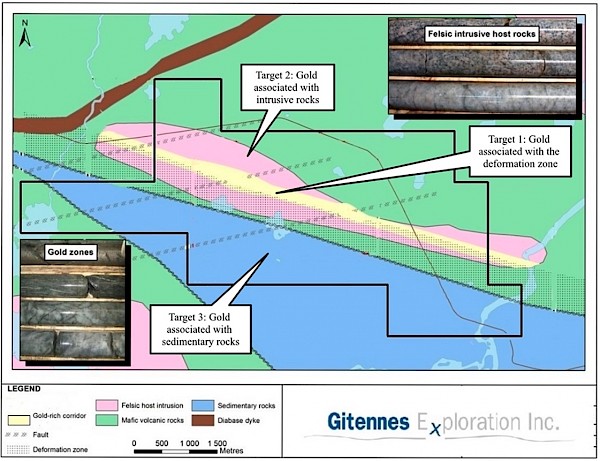 The next phase of work on JMW will be an Induced Polarization (“IP”) survey.  Past IP surveys and drilling on the property focussed on a narrow, 1.5 kilometre strip in the vicinity of the Guercheville fault zone.  This covers less than 50% of the existing property.  The new IP survey will verify data from the previous survey as well as add data on previously uncovered parts of the property and will include the sedimentary package that has seen little to no exploration in the past.  This sedimentary package is the same formation that hosts the multi-million ounce Nelligan resource.